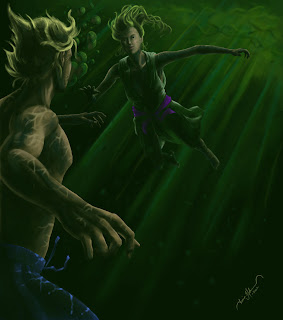 I am now working on some other projects. I am going to try and finish a piece based on the Legend of Sleepy Hollow before Halloween. And my firend wants me to do a painting of one of his CoH characters after he hits level 50. Then I have a person that I am going to do a Volleyball painting for, and finally I was commissioned to do an Acrylic painting of a dog (that needs to be completed before Christmas). So, I am pretty dang busy with stuff, and this doesn't even include any of my school projects.
Posted by Travis Adamson at 9:46 AM 1 comment: 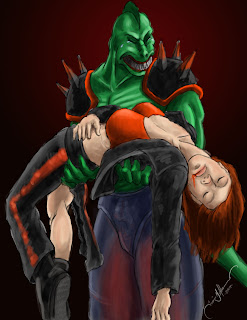 Well, I think this image will just about end my ramp up to commissions. I think this has shown me that I can accomplish what I need to in an amount of time that will be both convinient and allow me to keep my costs low enough to hopefully get people to commission me.

This image was done in about 2.5 to 3 hours. I used no referrence during the actual design and placement, but I had seen an image previously that I was trying to emulate (but I could never find the actual image to use for reference). I know that there are some flaws with the anatomy, and that I need to clean up my colors a bit more around the edges, but overall I think this is a pretty good piece. Also, since this was a freebie and that I wanted to finish it in one evening, I had to cut some corners to get it posted before it got too late.

Now to decide on pricing...
Posted by Travis Adamson at 12:25 PM No comments: 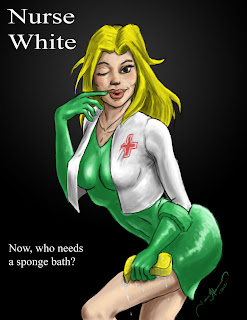 This is a digital painting I did of another City of Heroes Character. The person specifically asked for a similar pose and wanted it to be playful and sexy. Anyway, I tried to capture those qualities in the image.

The painting was done in PhotoShop CS2 using a Wacom tablet. It took about 2.5 hours to complete.

This image, like the one below, was done mainly for the pupose of trying to decide how long an average piece will take to complete. I am trying to get a feel for time so I can start devising a payment schedule for doing commissions. I don't want to charge so much that people will not want to commission me, but I don't want to charge so little that I don't feel the price is worth my time. And so, by knowing what I can do given a certain amount of time I am better able to compile a price list for different projects.

Anyway, I think I my style lends it's self nicely to comic characters since I seem to have a more cartoonish style when I am working fast and from memory. Anyway, here is to hoping that I am able to make some extra cash on the side doing commissions...
Posted by Travis Adamson at 3:57 PM No comments: